By Global Ministries (Disciples of Christ and United Church of Christ) on June 19, 2020

From the South Sudan Council of Churches

To mark the International Day for the Elimination of Sexual Violence in Conflict, observed globally on I 9th June, the South Sudan Council of Churches (SSCC) issues the following statement by which we, the undersigned Church leaders:

o Reiterate our condemnation over the use of sexual violence during any conflict or inter­communal violence.
o Emphasize the sacredness of human life, the inherent dignity of every human beings as well as their physical and mental integrity as reflected in the teachings and values of the Christian faith.
o Welcome commitments made by parties to the conflict in South Sudan to protect civilians, especially to prohibit their respective forces to commit or command or condone acts of sexual violence such as rape, sexual slavery and forced marriage.
o Acknowledge that the Agreement on Cessation of Hostilities, Protection of Civilians and Humanitarian Accessand the Revitalized Agreement on the Resolution of the Conflict in the Republic of South Sudanenshrine the obligation of all parties to the conflict to refrain from acts of sexual and gender-based violence in line with international human rights and humanitarian law.
o Welcome the adoption of action plans in 2019 by South Sudan People's Defense Forces (SSPDF), pro-MACHAR SPLA in Opposition, South Sudan National Police Service (SSNPS) and the issuance of command orders in 2020 by the National Salvation Front/ Army (NAS) which commit to measures to prevent and respond to conflict-related sexual violence.
o Note that despite formal commitments, parties to the conflict in South Sudan continue to target women, girls, men and boys with acts of sexual violence as an infamous tool to harm, humiliate, displace and stigmatize the civilian population undermining social cohesion.
o Raise concerns over the increased use of sexual violence by local communities, armed youth and militias in various parts of the country including JONGLEI, WARRAP, WESTERN BAHR EL GHAZAL and the greater EQUATORIA REGION, to settle disputes through the abduction of women and children, forced marriages, and rapes.
o Highlight the indelible suffering that sexual violence can inflict on victims, their families and communities such as chronic injuries, mental disorders, isolation, anger and loss of livelihoods.
o Appreciate efforts carried out by Church and partners across the country during the last twelve (12) months to eliminate stigma against victims of sexual violence and to provide them with care, protection and justice.
o Underscore the imperative of social cohesion and peaceful resolution of disputes in South Sudan in line with the Revitalized Agreement for the Resolution of Conflict in South Sudan (R-ARCSS) and the appeal of the UN Secretary General for a global ceasefire in response to COVID-19 pandemic.

On the occasion of the International Day for the Elimination of Sexual Violence in Conflict, the Church in South Sudan through the South Sudan Council of Churches (SSCC) stand united in strongly denouncing "Conflict-related Sexual Violence" and therefore:

o Urge all parties to the conflict to swiftly implement their commitments to prevent and respond to sexual violence perpetrated by their personnel, including through breaking a culture of impunity regardless of the perpetrators' ranks.
o Urge all parties to the conflict to observe the 2017 ceasefire agreement and the 2018 peace agreement in order to build an inclusive and prosperous South Sudan.
o Urge community leaders, armed youth and local militias to return abducted women and children to their respective communities without delay and refrain from using sexual violence to settle localized disputes.
o Appeal to religious leaders of all faiths to promote social cohesion among their followers and dialogue initiative to peacefully address any disagreement.
o Commend survivors - both men and women - for their strength in speaking up against sexual violence defying a culture of stigma and fears of retaliation.
o Pledge our support to ongoing efforts to end conflict-related sexual violence including through spiritual and material support to survivors according to resources available.
o Remind government institutions of their obligation to provide survivors with comprehensive services such as health, justice including reparations and livelihood programs.
o Invite non-governmental organizations, donors and other partners to continue supporting the provision of survivor-centered services aiming at alleviating the trauma and promoting social justice and economic empowerment.
o Recommend community dialogues and conversation to address gender-based discrimination which underlies sexual violence and reverse the stigma from the victim to the perpetrator. 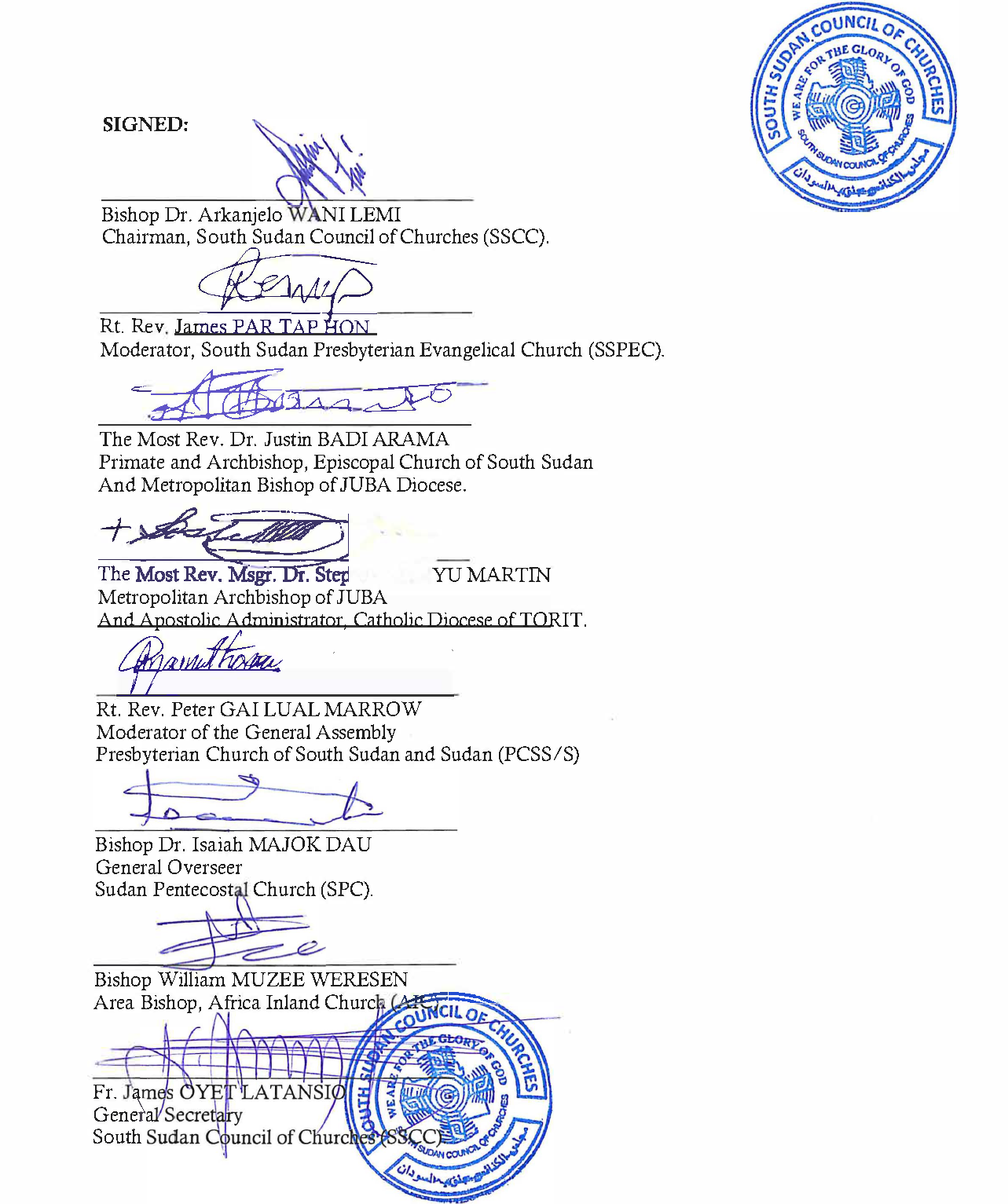