“It is our sincere desire and prayer, shared with many Jews and Muslims, that there should be no hostilities among neighbours in Israel and Palestine, and beyond, in the whole Middle East region.” These were the words of the World Council of Churches (WCC) general secretary Rev. Dr Olav Fykse Tveit, shared in his message for the World Week for Peace in Palestine and Israel (WWPPI), observed from 21 to 27 September

The theme of the week this year is “God has broken down the dividing walls”.

The National Coalition of Christian Organisations in Palestine and the Palestine Israel Ecumenical Forum of the World Council of Churches invite you to sign the petition to:

“We pray and work for the peace desperately needed by both Palestinians and Israelis. As we pray that the wall will fall, I appeal to you to promote participation in this year’s WWPPI,” said the WCC general secretary in his invitation to churches and ecumenical partners.

In his message, Tveit brings to the attention the hard reality of the Palestinians, especially the Christians, suffering from the impact of the wall on their livelihood. Tveit said that this Saturday, Christians will gather at Beir Ouna in the Cremisan Valley, a land close to Bethlehem. “This gathering of faithful Christians will take place under the eye of Israeli security forces there to protect the equipment being used to remove centuries-old olive trees from land owned by Palestinian Christians to make way for the latest segment of Israel’s separation barrier.”

“This strategic, nonviolent witness is intended to confront not only those individual soldiers and police but the unjust structures and systems supporting Israel’s illegal occupation of Palestinian land.”

He also wrote that many WCC member churches have made “peace with justice in Israel and Palestine” a top priority in their work. “The global church effort to promote awareness and advocacy informed by the perspectives of Christians in Palestine and Israel is growing.” He added, “The WWPPI provides us with an opportunity to focus our efforts in order to amplify our global solidarity. I therefore encourage your full participation in this significant week of witness and peace building.”

Both the Christian Church (Disciples of Christ) General Assembly and the United Church of Christ General Synod adopted resolutions in 2005 calling for the separation barrier to be removed. 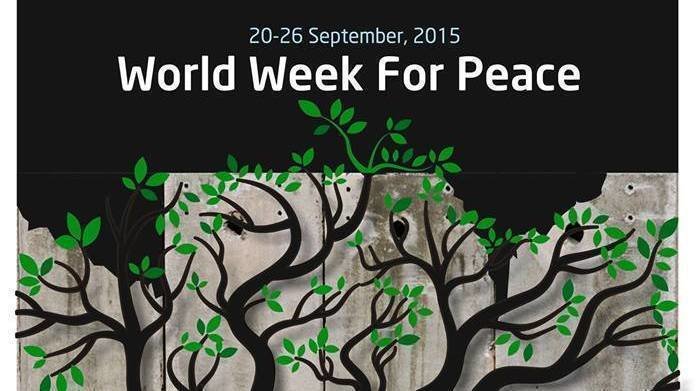