One of my first experiences in the UK was going to a festival a few hours away with my supervisor’s family. We saw a comedian in a giant circus tent, who asked the audience to raise their hand and say where they are from. I shot my hand up, eager to talk about the location of my new home. But upon saying that I am from Chicago and now live in Wolverhampton, the tent erupted with laughter. The comedian continued to joke, questioning why an American would go to Wolverhampton instead of London or, frankly, anywhere else.

Throughout my year, I have received many comments about how Wolverhampton is a dump. Multiple people have told me the story about how Wolverhampton was voted the 5th worst city in the world by Lonely Planet. Even a traveling street artist with whom I had a long, engaging conversation with in Birmingham had a negative opinion of it. When asking for suggestions on where to go next, his face fell as he quickly rejected the idea when I told him Wolverhampton would be a great place to go. 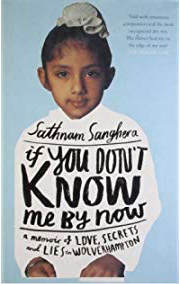 The worst part about Wolverhampton in my opinion is the negative attitude its own people have about their home. In his book “If You Don’t Know Me by Now”, Sathnam Sanghera discusses his childhood in Wolverhampton saying “I’ve always taken it as one of life’s certainties, alongside the fact that water freezes at zero degrees… that Wolverhampton is the crappest town in Britain. And I’m hardly alone: Wolves, or Wolvo as it is known by many inhabitants, has been a byword for misery in books and stand-up routines for decades” (55). While there is humor in this statement, this sentiment is echoed by many who live here. This sentiment is not a foreign one either. I have lived in places that I would’ve called “the crappest town in America” and maybe you have too.

Something special about living somewhere for just a year is that I am more focused on the present moment, soaking in every day and every experience I have here. Even in the rutted route I bike to work multiple times a day, even in the routine and mundane setting up and clearing away when the kids I work with aren’t there anymore, I try to live in the moment.

In this process, I have genuinely appreciated so many things about the great city of Wolverhampton. Historically, Wolves was at the heart of the industrial revolution and later became one of the first meccas for immigrants during the Windrush period. Lea Road URC, the church I work at, was and still is known to welcome people from all countries and all backgrounds. The colorful diversity of Wolverhampton’s people empowers Lea Road URC to achieve this. For if Wolverhampton just had white British people, the church would not be able to live into its full mission.

Today, Wolverhampton inspires me. Below are some pictures and captions of cool parts of the city I have personally come to love (and many that are often overlooked). 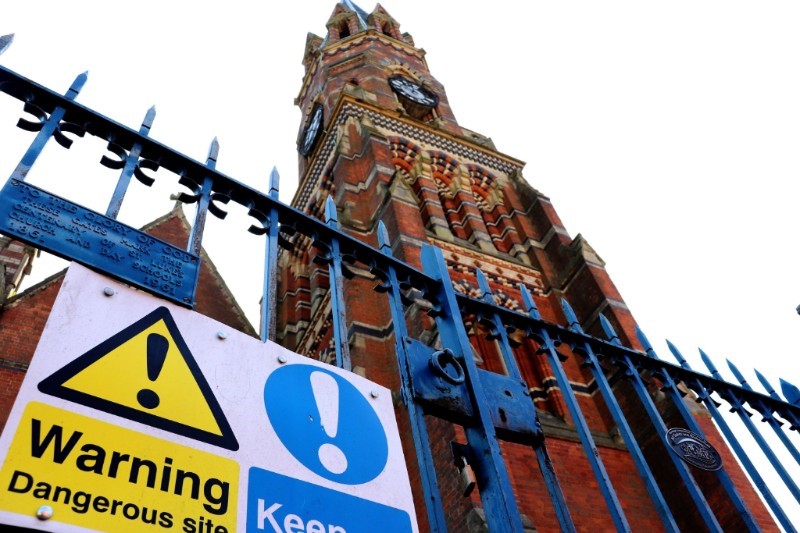 St. Luke’s church is a beautifully designed building that is now off limits because the structure is unstable. A company cleaned all the bricks on the outside but the cleaning solution actually deteriorated the material so much that it is dangerous to go inside. While its just a random building that serves no function now, I love it because it is the first landmark I can see from the top of the Phelps’ street where I used to live. Biking past here reminds me of how much I love the Phelps. 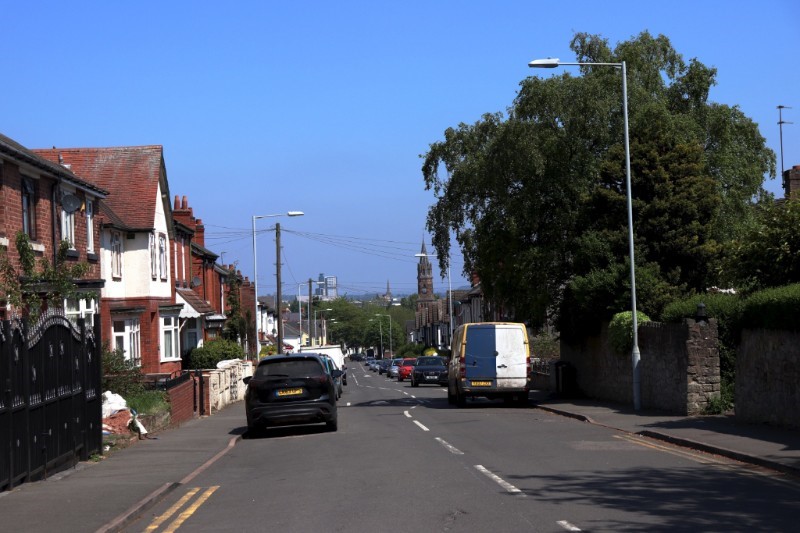 This is the top of Fowler Street, where the Phelps live! Julie Phelps and I have a running joke where I tell that her street is so pretty and that she should go to the top and look. And every time I ask her if she’s done it yet, she’s like oh I forgot! Yet she still doesn’t believe it will be that great of a view! I often stop here and enjoy this beautiful view. On the right in the distance you can see the top of St. Luke’s church. 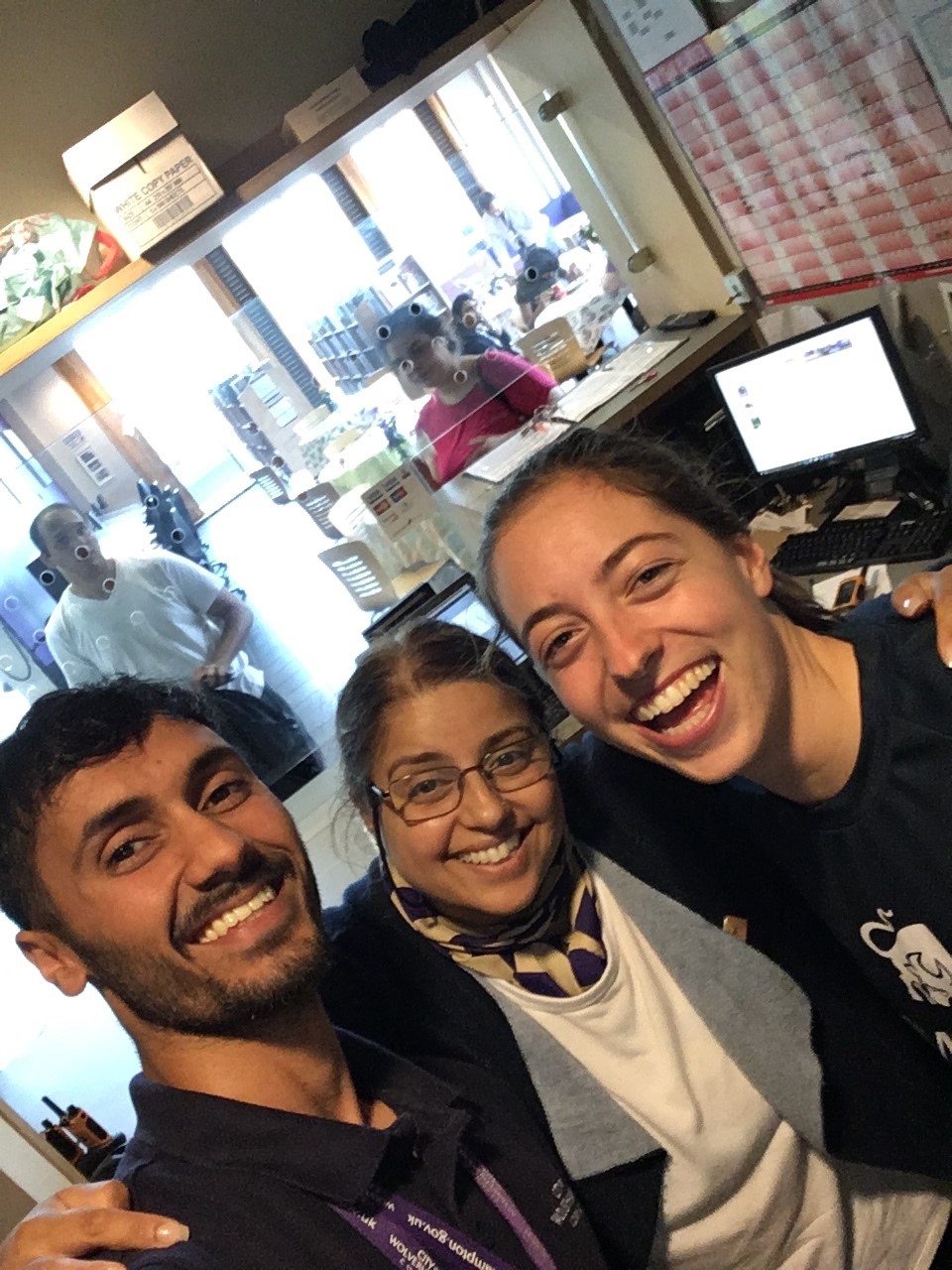 Here are my friends Harry and Jin who work at the Bob Jones Community Centre gym. While the centre appears to be an ordinary gym, the staff are so kind! One personal trainer gives me free advice about core exercises and he excitedly shows me pictures of his triathlon races. Another staff member makes sure my bike doesn’t get stolen or damaged by always offering to lock it inside the boiler room of the building. Another staff member talks with me about Psychology and we have opened up to each other about our lives. The gym regularly has adults with mental disabilities come and use the machines and is welcoming to elderly and physically disabled people too! It’s such a welcoming place and Harry and Jin made times of loneliness for me a lot more manageable! 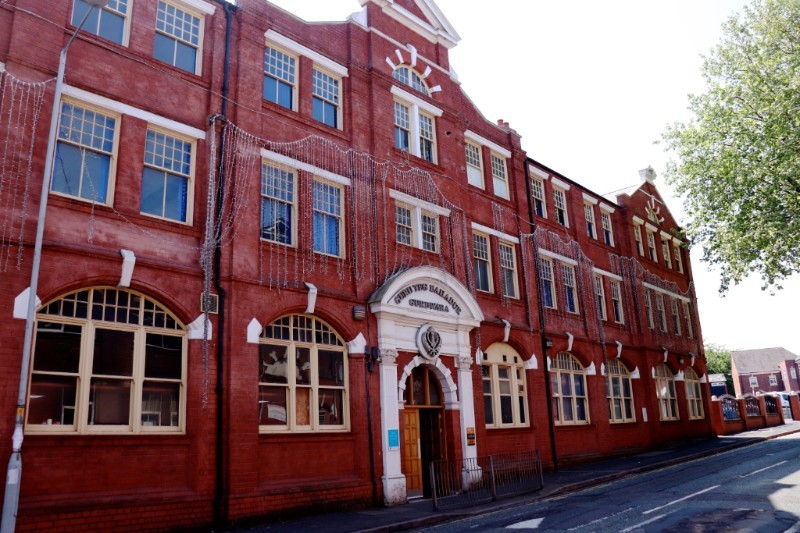 This building used to be a motorcycle factory and now it is a Gurdwara. Per the Sikh religion, anyone can come in and receive a free meal no matter what you believe in or who you are. There is also a museum inside about Sikhism and when I have visited, the women who cook all day long insist that I try their food! 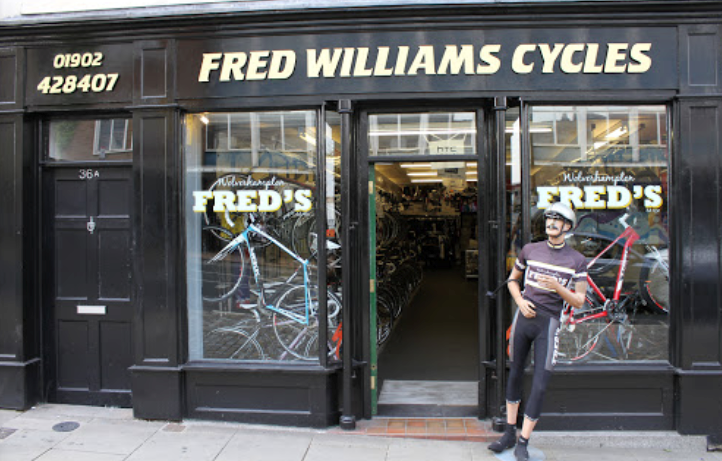 Fred’s is a bike store where the people are really kind! When I come in, people will stop working in the shop and come to chat. A 5 minute tune up for my bikes often multiplies into a good, long conversation. The guy standing outside is fake but also looks a little spooky! 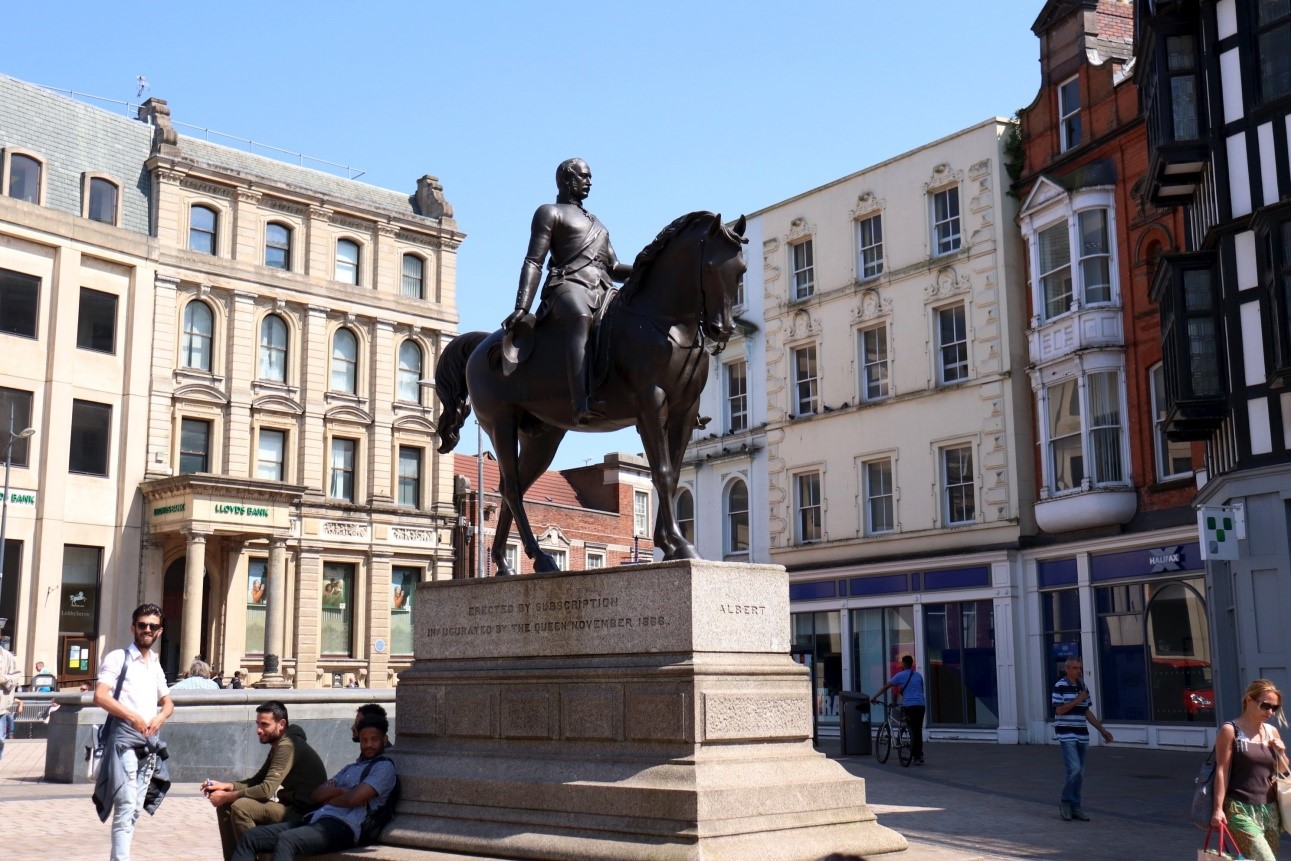 This is the Man on the Horse (or as my friends and I like to call it, MOTH). It stands in the city center and is a meeting spot where people go to find their friends. I bike past it regularly and it will always be a cool landmark to me! 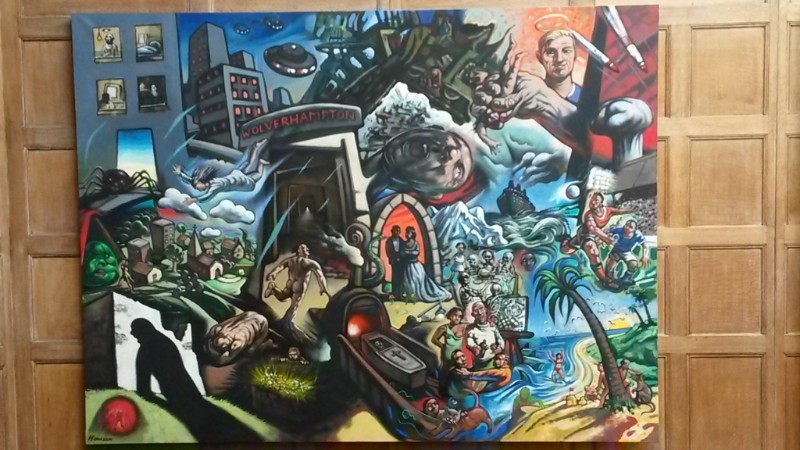 I have visited the Art Gallery in Wolverhampton many times and one of my favorite paintings is this one. It was made in 2000 to commemorate the past present and future of Wolverhampton. I really like it because it shows the really positive parts of the city as well as the pain the city has held. 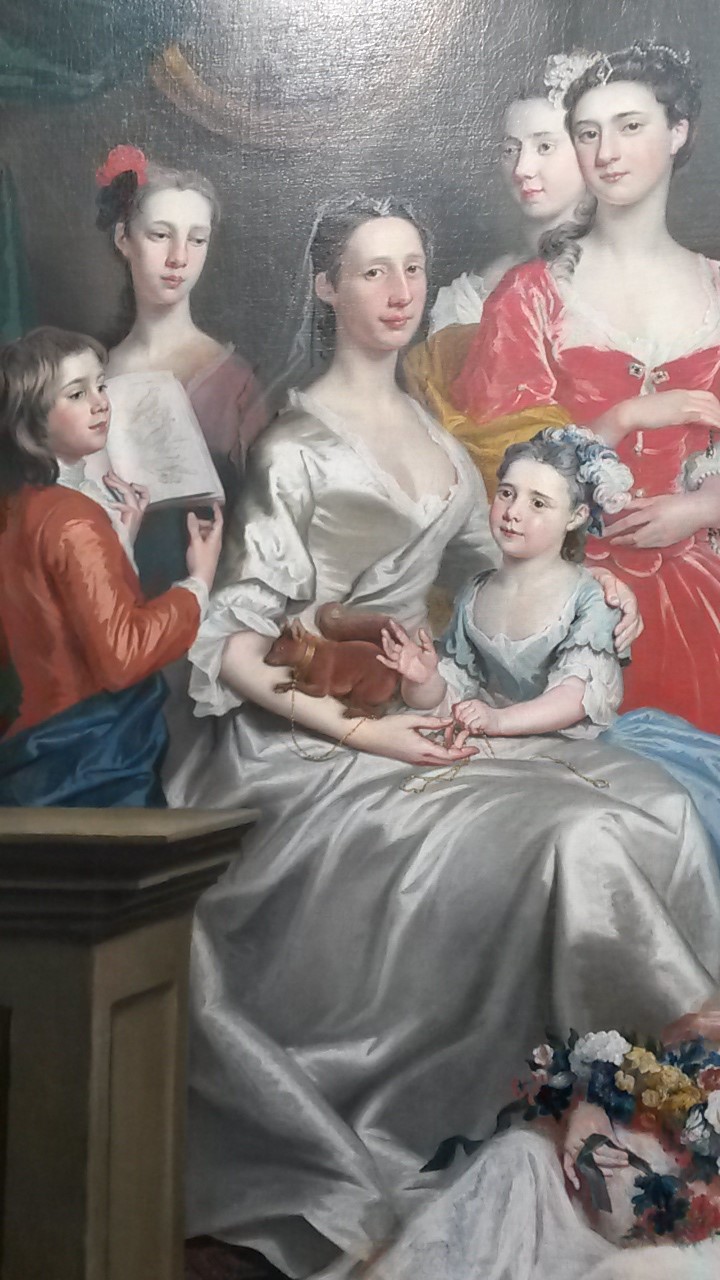 This is my #1 favorite painting in the Wolves art gallery because I want a pet squirrel too! 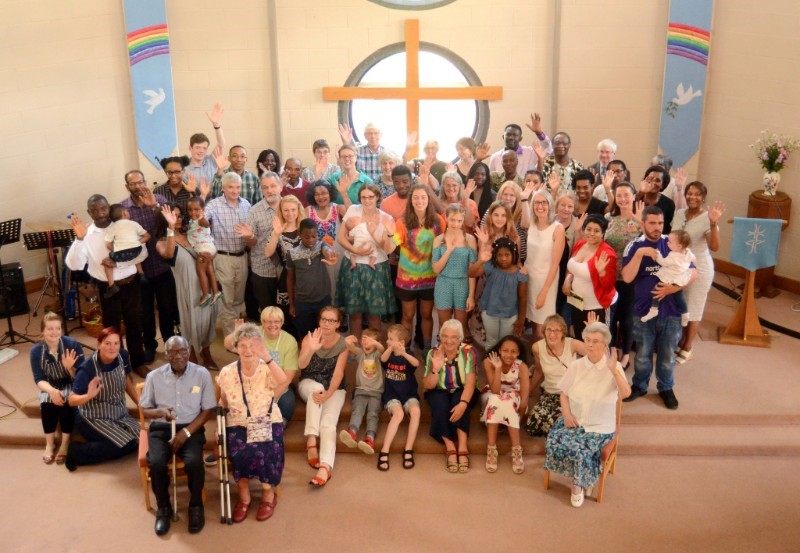 While I have made lots of friends with random people and have felt very welcome in my home of Wolverhampton, my favorite part of the city is the community at Lea Road URC. We are a small congregation, but welcome people from all backgrounds, all ideas about faith, and all walks of life. I feel so grateful to be a part of their story.

While living in Wolverhampton, I have grown to love the people and feel connected to this city. I have invested in the people I’ve met and they have invested in me.  After only knowing Wolverhampton for a year, I feel a sense of belonging here. Wolverhampton feels like a second home.However, this is no superpower. It is not a specialized skill I learned in YAGM orientation. It is not a condition that only applies to people living in unfamiliar places. And while I won’t deny that some strangers’ friendliness may have originally stemmed from their curiosity about my Amercianness, striving for an open and welcoming community is still a conscious choice. While it is not easy, it is entirely possible for that same hospitality to be extended to everyone one meets, no matter how “crap” the city one lives in. Each one of us can stop and savor the good in where we are at. We can know each other on a deeper level. We can explore local places and buildings. We can give life to our home cities! It just starts with one conversation. The support I received from you this year has been an important part of my journey. Thank you for your encouragement, thank you for listening, and thank you for walking with me this year.

I moved back to Chicago this past weekend and I will be based in Chicago until the end of August, when I start the Justice Leadership Program in Seattle. Through the program, I will be advocating for and educating the public about people experiencing homelessness and immigrants!