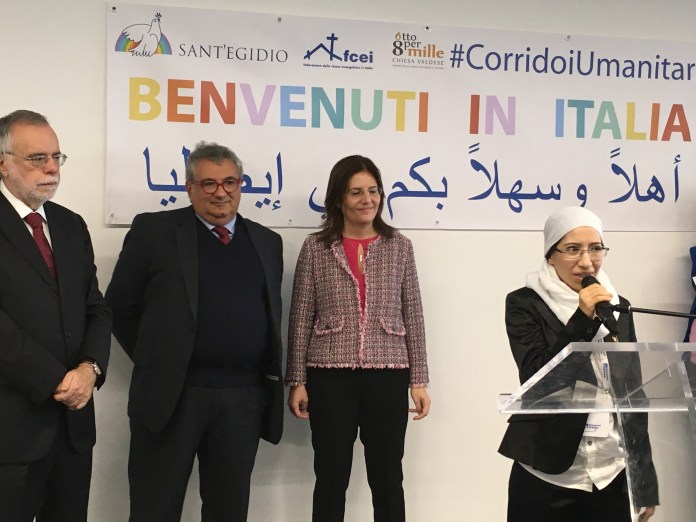 Immigration is a controversial issue in Italy.  This is the story of one immigrant and her family who came to Italy through an Italian ecumenical ministry called Humanitarian Corridors.

She arrived in Italy on February 4, 2016.  Of the flight that brought her and her husband and their two small children from Beirut to Rome, she remembers only the emotions she felt on the plane, and the flowers and hugs they got when they landed.

Yasmin Al Hourani is Syrian.  She was born in Homs, a city close to Damascus. There she grew up and there her two children entered the world.  In 2011, when the war broke out, she was already married to Suleiman.  In those days, Suleiman worked repairing electronic devices like cellphones.  Yasmin gave lessons in Arabic and English.  In the first two years after the fighting began, Homs was leveled by bombing.  During those two years, the couple’s friends and family all fled the city.  There were others they knew who died or disappeared in prisons.  Living conditions became almost unbearable.

Suleiman remembers that all she could hear most days was the noise of bombs and mortars. She and Suleiman resisted leaving until long after they were the only ones left in their neighborhood. She explained how they finally decided to leave:  ” We left only when it was not possible to live any longer where we were.”

The journey to Lebanon by car was full of danger. Yasmin recalls feeling pursued by the bombs, and by the fear that a grenade might hit the car they were traveling in.

But instead of getting hit by a grenade, their car arrived in Tripoli, a city on the sea, where they rented a garage to live in because the cost of an apartment was too high.  There Suleiman tried to find work repairing cellphones but it was difficult to attract customers in a foreign country.  For her part, Yasmin could find only a few students for her language lessons.  Suleiman and Yasmin enrolled their children in a local school.  The school had morning and afternoon shifts, the morning classes were reserved for Lebanese children, Syrian students could only attend school in the afternoon.

Much worse, within a few months of arriving in Lebanon, Falak, the daughter, was diagnosed with retinoblastoma, a rare form of eye cancer, and had to have one eye removed in a Beirut hospital.

It was at that point that, through acquaintances, Yasmin’s family got in touch with social workers from Mediterranean Hope which was then just beginning work in Beirut.  After repeated interviews, the Al Houranis were granted legal and safe passage to Italy, largely because Falak’s health situation had become critical and she was at risk of losing the other eye.

The Al Hourani family now lives in Rome. The children are in third and fifth grades.  Suleiman works in the Porta di Roma shopping center. Yasmin has a job in a canteen and as a cultural mediator.  After work hours, she is enrolled in the second year of a three-year degree program for mediators in intercultural understanding and social cohesion.

Yasmin’s mother, sisters and brothers have been stuck for years in the Jarabulus refugee camp on the Syrian border with Turkey.  The chances that the entire family will ever be together again are minimal.

When her schedule allows, Yasmin goes to the Rome airport to greet new groups of refugees coming to Italy through the Humanitarian Corridors program.  There she speaks with them in Arabic or Italian or English, depending on where they come from, and tells her story.

The Al Houranis were the first family to arrive in Italy through the Humanitarian Corridors program.