The Ikengo Agricultural Center was established by the Community of Disciples of Christ in Congo (CDCC), which has related to Global Ministries for over 100 years, in order to make the best possible use of available farmland.  For several years Ikengo provided livestock (hog, duck, and chicken-raising) and crop growing activities (truck gardening activities and food crop activities).  Ikengo has however faced many challenges, primarily its location which is approximately 10 miles over rough road to the nearest town.  Because of the road conditions, large trucks needed to transport items from the farm were unable to be utilized.  The farm is accessible by water which is only two miles away; however, the program participants, mostly women, had to walk the two miles carrying the produce on their heads, limiting the amount of produce that could be sold.  Further complications arose when the agronomist hired by the CDCC to run the program left for a new job and his replacement was unable to keep up the farm activities.  It was, therefore, decided to abandon the Ikengo Farm Project.

The Department of Women of the Community of the Disciples of Christ in Congo decided to take on the pending agricultural project as their own, using approximately ten acres of land owned by the Church.  The land is located in Bolenge and is being worked by approximately 50 women using their own tools.  Because of the proximity to Bolenge, the women are able to transport their goods without the problems of location incurred at Ikengo.

The acreage is being used to grow soybeans, peanuts, and corn.  Because the acreage is across from Bolenge Hospital, the women have been in conversation with the doctors there to find out what crops would provide the best nutrition for the people in their area.  Soybeans and peanuts were chosen because of their high protein levels and are being used for meals of patients at the hospital and with the people of Bolenge in general.  The corn was chosen as the money crop to sell.  Funds from the sale of the corn has helped the women to reinforce and expand the Nutrition Center through Bolenge Hospital.

Funds are needed to help the Department of Women maintain their efforts of providing sustainable farming activities that contribute to improved health.

The Women’s Food and Nutrition Project on CDCC farm land near Bolenge continues to succeed and provide nourishing foods, such as several types of potatoes, a variety of beans, and many vegetables.  The CDCC’s Department of Women’s dedication insures success on the farm and its production, and over 50 women are involved in work on the farm.  These women use the food provided through the farm to feed their children and families.  Remaining portions from the food produced on the farm are used in Bolenge Hospital, which is very close by, for patients’ meals during their stay.

Due to the success of the Women’s Nutrition Farm area, the CDCC is planning to begin implementing the same model of farm in other districts of the CDCC. 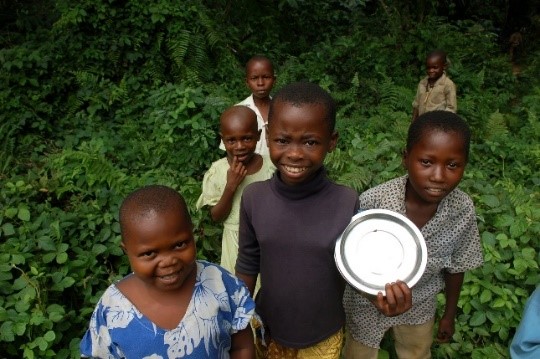 e Congo is filled with fertile land, rivers for fishing, and forests for hunting. However, food insecurity is a growing issue for many communities. Most families eat a diet primarily consisting of cassava leaves and bread. The distances between villages are becoming further apart due to human pressures on the forest, which makes the availability of hunting, and gathering mushrooms and fruit more challenging. Additionally, the price of fish is increasing in local markets, making fish a luxury for most families.

The CDCC continues to address food insecurity with a priority of addressing malnutrition among children under the age of six. Therefore, the CDCC has been distributing food and medicine for children who are diagnosed as malnourished, and they are offering new training workshops and farming equipment for families who live near church districts. The purpose of this project is so that each family can eat the produce they grow and increase food security throughout the community. Additionally, new microcredit projects are being formed with a focus on teaching and preparing families for animal husbandry, including the raising of pigs and poultry. Lastly, the CDCC is in process of forming a shop to provide farming equipment and supplies for families.

The Nutrition Center of the Community of Disciples of Christ in the Congo (CDCC) in Losanganya in Mbandaka has been helping families with children who are acutely and severely malnourished for many years. In addition to programs and meals provided at the center, health workers of the nutrition center visit homes to train families on nutrition, provide meals and local foods to families, and treat malnourished children when treatment is required.

Thus far in 2022, the center is working with 21 children who are experiencing malnutrition, including eight acutely malnourished and thirteen who are severely malnourished. One challenge the CDCC is seeking to address is that families feel shame bringing their children to the center. Therefore, the health workers are working to help families feel supported and creating a welcoming environment at the nutrition center. Additionally, the CDCC is planning more visits out in the communities and into homes, so that families do not have to take that step in bringing their children to the center.

The Incredible Riches of Congo

Bryan Parrish serves with the Church of Christ in Congo. Praise be to the God and Father of our...

The All Africa Conference of Churches standing united and in solidarity with Churches and all...