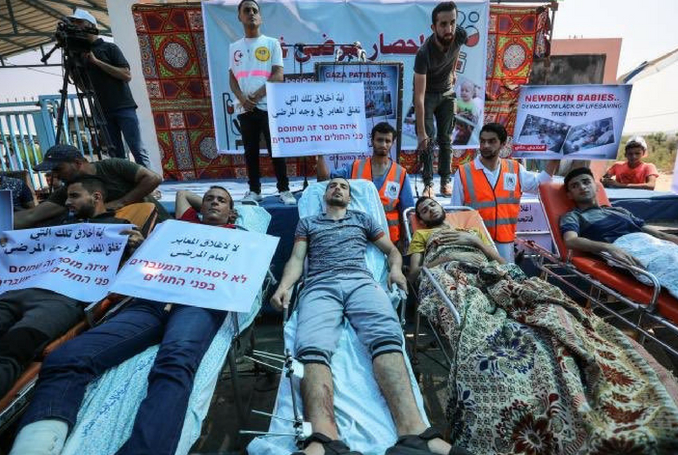 The incarnate word of God is bread, bread that is harvested and baked by human hands. We participate in the life of Christ not only at the communion table but when we become the bread of life for others, when we stand up for those who are lacking the most essential goods and services to live.

In mid July, Israel closed the Kerem Shalom Crossing, the communal crossing that allows goods in and out of the besieged Gaza Strip. The closure has led to a shortage of cooking gas and fuel leading to a crisis for essential services like sewage and waste management to medical care. Blocked medical supplies and equipment has put many lives in danger. No clean water to drink and a polluted sea has made many more dangerously ill. At present nearly two million Palestinian residents of Gaza, over half of whom are children, receive electricity for no more than four hours each day. Things were are so bad that the patients at the Gaza City Hospital staged a sit in to raise awareness of these shortages facing medical facilities as the result of the 11 year old blockade and sanctions imposed by the Palestinian Authority.

The Joint Advocacy Initiative of the East Jerusalem YMCA and the YWCA of Palestine, two of Global Ministries partners, supported the Great March of Return that began in mid May calling the world’s attention to the dire situation of Gazan refugees who asserted with dignity their right to return to their homes just across the fence, and to live in freedom. The YWCA asks that you stand with them now as they demand that Israel rescind these severe restrictions and the Palestinian Authority its collective punishment against the Gazan people.

If Jesus is indeed the bread of life and we partake in that life then we too must do all we can to stand against all policies or actions that deny life for others. We, who believe in the resurrection, must stand for life. We must become bread for others to live.

A Communion Liturgy for this special day

God of hope
open the doors of heaven
and rain down manna.
Feed us with your Son
whose life was broken open for us

God of hope
in such dark times as these
give us enough
love and outrage
to put out the fires
of hatred and injustice around us
give us enough
to fill our baskets with food for all
even left overs.

Jesus, we come to this table
broken and beautiful
just as we are—-
young and older.
We come to drink from the cup of blessing
to eat from the bread of life.

The table is set.
All is prepared.
Come as you are.
All are welcome to the banquet of life.

God of today and tomorrow
we live between memory and hope
for your kin-dom come
on earth as it is in heaven.
We go forth now
full and ready
to do your work
in faith and love.

Supplies of emergency fuel provided by the UN for critical facilities in Gaza are being fast depleted, the Humanitarian Coordinator, Mr. Jamie McGoldrick, warned today. He called on Israel to end restrictions preventing the import of fuel and for donors to provide immediate funding for emergency fuel, currently set to run out in early in August.

“At least one hospital has been forced to shut down for a few hours, and services are being dramatically reduced at others,” said Mr. McGoldrick. “Given ongoing blackouts of about 20 hours a day, if fuel does not come in immediately, people’s lives will be at stake, with the most vulnerable patients, like cardiac patients, those on dialysis, and newborns in intensive care, at highest risk.”

According to the World Health Organization, Al Quds Hospital, which provides life-saving medical interventions for 150,000 people per year, including major surgeries, deliveries and intensive care will be forced to shut down in coming days due to lack of fuel, with another four hospitals likely to run out within the next three days, thus significantly reducing provision of essential medical services to the population in Gaza. The Palestinian Ministry of Health already has implemented strict contingency measures: hospitals have reduced diagnostic, sterilization and cleaning services, increasing the risk of infections amongst patients. Elective surgeries are being further reduced. Over 7,000 elective surgeries have been postponed in recent months due to the mass trauma casualties and low resources available to cope with the demand.

At highest risk, currently, are over 2,000 patients in Gaza’s hospitals, who rely on electrical devices, including neonates in incubators. Over 1.27 million people will be directly affected by the closure of the hospitals and reduction in provision of vital health interventions. Additionally, the reduced functioning of water and sanitation facilities risks an increase of waterborne disease and outbreaks. At present, water and sanitation facilities are rationing available fuel supplies, which will be exhausted by the end of July, if fuel imports do not resume. In addition to further reductions in water supplies, this would also potentially lead to sewerage overflowing into inhabited areas, entailing grave public health risks. Funding for emergency fuel will run out for all critical facilities in early August, with US$4.5 million required to cover fuel supplies through the end of the year.

“Until more sustainable solutions for the electricity crisis in Gaza are found, two steps can avert further devastation in Gaza in the short term,” said Mr. McGoldrick. “Israel must let fuel and other essential supplies in and donors must mobilize resources to ensure that critical facilities receive the fuel they need.”

Since 16 July, the Israeli authorities have prohibited the entry of fuel into the Gaza Strip, in the context of tightened import and export restrictions, reportedly in response to the launching of incendiary kites from Gaza into Israel, which has caused extensive property damage. An average of 950,000 liters is distributed by the UN each month to around 220 critical hospitals and health clinics; water and sewage treatment sites; and solid waste collection services. The deliveries ensure that a minimum level of life-saving services can be maintained in the midst of the dire electricity shortage facing the Gaza Strip. At present, the nearly two million Palestinian residents of Gaza, over half of whom are children, receive electricity for no more than four hours each day. Over 60 per cent of the emergency fuel is consumed by some 50 health facilities.

The recent developments have exacerbated the existing humanitarian crisis driven by 11 years of Israeli blockade that has raised concerns over collective punishment and human rights violations, alongside an unresolved internal Palestinian political divide.

Global Ministries Mission Coworker in Israel/Palestine:
Rev. Loren McGrail served with the YWCA of Palestine. Her appointment was made possible by your gifts to Disciples Mission Fund, Our Churches Wider Mission, and your special gifts.