Laos is a small, tropical, landlocked country in Southern Asia, which shares borders with Vietnam, Thailand, Cambodia, Myanmar, and China. Originally part of one of the largest kingdoms in Asia, Laos became a French protectorate in the late nineteenth century. Laotian independence was achieved following Japanese occupation during the Second World War, however, it was short lived and the country soon fell under French colonization until its independence in 1953. The country experienced a brutal civil war in 1959 that lasted until 1975 between Soviet-backed communist forced and a series of US-backed military dictatorships. During the Vietnam War in the late 1960s, North Vietnam forces used regions of Laos to move supplies. As a result, much of Laos experienced heavy bombing from US forces to break up the Ho Chi Minh Trail. The heavy bombing was comparable to the number of bombs employed by the United States on all fronts during World War II and made Laos the most heavily bombed per capita country in history. Many of these bombs failed to detonate upon impact, and are still hazardous to rural populations today. Many regions of beautiful Laotian nature are inaccessible due to the danger of these scattered pieces of ammunition.

The rural areas of Vientiane Capital have suffered a great deal from both external and internal...

Lectionary Selection: Mark 1:4–11Prayers for Laos: Mighty God, who loves us unconditionally, you... 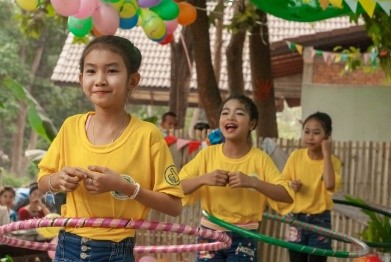 After School Programs in Laos

Laos Click here to read the latest update Global Ministries, through its relationships with...

The Lao Evangelical Church is an organization of the Protestant Christian churches is Laos. They...

Laos was settled by Thai tribes from China during the 13th century C.E., and the area was unified...

Lectionary Selection: John 20:19–31 Prayers for Laos:Mighty God, in whom we know the power of...