How would you describe the mission of our partner in Lebanon?

Inspired by the Armenian Evangelical heritage and following the American liberal arts educational model, Haigazian University is jointly owned by the Union of the Armenian Evangelical Churches in the Near East (UAECNE), and the Armenian Missionary Association of America (AMAA). It is the only Armenian university outside of Armenia, and is known for having a student body of diverse backgrounds seeking higher education in a personalized, socially moderate, and religiously tolerant environment. They emerge with a broader range of friendships spanning a variety of communities, so that their service in their respective communities and to society at large is expressive of the broader ideals of Lebanon.

Although the UAECNE’s offices are in Beirut, its presence stretches throughout the Middle East, with a network of churches, schools and institutions. They primarily, though not exclusively, serve the needs of the Armenian communities in the countries they reside, after having been displaced from their historic homelands early in the 20th century. Specifically, I am working with their camping ministry. Located on a hillside outside of Beirut (near Mansourieh) is the UAECNE’s Christian Endeavor Summer Center – KCHAG. The 1975-1990 civil war and the dozen years that followed interrupted and damaged KCHAG’s ministry in a major way. Yet, since 2002, after a great deal of cleanup and renovation, this nearly 70-year-old camp is back to serving Armenian and non-Armenian churches and sister organizations alike. KCHAG has had a rich past, and by faith and persevering work, it can also have a great future for ministry and community development.

In the case of Haigazian University, having worked there previously, I am applying my knowledge of the university, my administrative skills, my lifelong affiliation with the Armenian Evangelical Church and my familiarity with the Middle Eastern and Armenian contexts to promote the work of the university and help it flourish in the face of serious challenges.

Similarly in the case of the UAECNE, I am applying my experience and engagement with the church here as well as in North America to provide as wide a perspective as possible in developing the work of the camping ministries. I will continue to use my background and skills as I enter into new tasks, including occasional ministry with the Evangelical Church of Armenia.

The desire to serve alongside my husband in a field that has so many needs, especially where I am able to use my administrative and organizational skills.

Psalm 46.10 has been a beacon of strength and encouragement for me.

What are some of the challenges facing the people of Lebanon?

One of the greatest challenges facing the region, as well as the UAECNE, is the departure of many Christians, including Armenians, from the region. Experienced and qualified leaders are needed for the schools, relief programs and community activities here, and those emerging leaders need to be trained and mentored. There is a severe lack of financial resources, and that lack is entrenched as fewer people are left to support the ongoing work, while basic costs of living skyrocket. A less-than-transparent governmental system, as well as regional and international struggles playing out locally, add to the frustration and burden faced by ordinary citizens. This leads many of the brightest, most talented, and most principled youth to seek to emigrate from Lebanon to pursue their careers and life goals.

In the area of higher education, a high-quality institution like Haigazian University faces severe competition from the proliferation of less expensive, but academically questionable universities that have licensed by the government in the past two decades. There is a marked increase in the need of scholarship funds for university students, for Lebanese and non-Lebanese alike, including refugees from places like Syria and Iraq, whose financial situation is even more precarious than that of locals.

The church in the west should know that the church in the Middle East (of which the Armenian Evangelical Church is a part) is not expendable for any social, political or religious reason. The presence and work of the church is a crucial way for the peace, justice and hope of God to reach many people in difficult and destitute circumstances. The lessons of faith, hope and endurance are things that can richly bless the church in the west, if time and opportunity is given to hear these stories. Both the university and the camp are beacons of hope for generations to come.

More from Maria and Nishan 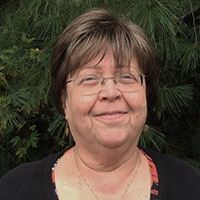 Maria Bakalian serves with the Union of Armenian Evangelical Churches in Lebanon. Her appointment is made possible by your gifts to Disciples Mission Fund, Our Church’s Wider Mission, and your special gifts.

Make a gift that supports the work of Maria Bakalian