How would you describe the mission of our partner in Lebanon?

Headquartered in Beirut, Lebanon, the UAECNE throughout the Middle East supports a network of churches, schools and institutions, primarily (though not exclusively) serving the needs of the Armenian communities in the countries they reside, after having been displaced from their historic homelands early in the 20th century. As part of the fabric of the church in the Middle East, and as part of the region, their ministry, especially in the areas of education and social service, have a positive impact on a wide variety of ethnic and religious groups, and serve to help improve the overall well-being of the region.

I endeavor to support these ministries by serving alongside the clergy and lay leadership, promoting the work of the UAECNE through various communications formats, by training and mentoring young leadership, by encouraging those who sacrificially serve here, by offering my musical, linguistic and administrative expertise to churches and schools, by friendship and fellowship with many people with whom I have served over the past three decades, by speaking, preaching and writing in the Armenian language, and by occasionally extending this same effort to a sister church union in Armenia, the Evangelical Church of Armenia.

God has reminded me that my gifting and equipping fit into areas of great need among churches in the Middle East. God has given me the desire to help grow new leaders in a region that bears the strain of continued exodus of qualified and experienced church leadership. The willingness of the CGMB and the Armenian Missionary Association of America to support Maria’s and my ministry was a significant indicator of God’s leading us to be here.

What are some of the challenges facing the people of Lebanon?

One of the greatest challenges facing the region, as well as the UAECNE, is the departure of many Christians, including Armenians, from the region. Experienced and qualified leaders are needed for the schools, relief programs and community activities here, and those emerging leaders need to be trained and mentored. There is a severe lack of financial resources, and that lack is entrenched as fewer people are left to support the ongoing work, while basic costs of living skyrocket. A less-than-transparent governmental system, as well as regional and international struggles playing out on the Lebanese stage, add to the frustration and burden faced by ordinary citizens. This leads many of the brightest, most talented, and most principled youth to seek to emigrate from Lebanon for what they consider a better future.

The church in the west should know that the church in the Middle East (of which the Armenian Evangelical Church is a part) is not expendable for any social, political or religious reason. The presence and work of the church is a crucial way for the peace, justice and hope of God to reach many people in difficult and destitute circumstances. The lessons of faith, hope and endurance are things that can richly bless the church in the west, if time and opportunity is given to hear these stories.

More from Nishan and Maria 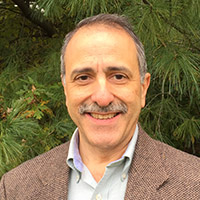